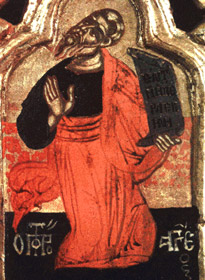 The people are reproved for neglecting to build the temple. They are encouraged to set about the work.

6 You have sowed much, and brought in little: you have eaten, but have not had enough: you have drunk, but have not been filled with drink: you have clothed yourselves, but have not been warmed: and he that hath earned wages, put them into a bag with holes. 7 Thus saith the Lord of hosts: Set Your hearts upon your ways: 8 Go up to the mountain, bring timber, and build the house: and it shall be acceptable to me, and I shall be glorified, saith the Lord. 9 You have looked for more, and behold it became less, and you brought it home, and I blowed it away: why, saith the Lord of hosts? because my house is desolate, and you make haste every man to his own house. 10 Therefore the heavens over you were stayed from giving dew, and the earth was hindered from yielding her fruits:

Christ by his coming shall make the latter temple more glorious than the former. The blessing of God shall reward their labour in building. God's promise to Zorobabel.

1 In the four and twentieth day of the month, in the sixth month, in the second year of Darius the king, they began. 2 And in the seventh month, the word of the Lord came by the hand of Aggeus the prophet, saying: 3 Speak to Zorobabel the son of Salathiel the governor of Juda, and to Jesus the son of Josedec the high priest, and to the rest of the people, saying: 4 Who is left among you, that saw this house in its first glory? and how do you see it now? is it not in comparison to that as nothing in your eyes? 5 Yet now take courage, O Zorobabel, saith the Lord, and take courage, O Jesus the son of Josedec the high priest, and take courage, all ye people of the land, saith the Lord of hosts: and perform (for I am with you, saith the Lord of hosts)

11 In the four and twentieth day of the ninth month, in the second year of Darius the king, the word of the Lord came to Aggeus the prophet, saying: 12 Thus saith the Lord of hosts: Ask the priests the law, saying: 13 If a man carry sanctified flesh in the skirt of his garment, and touch with his skirt, bread, or pottage, or wine, or oil, or any meat: shall it be sanctified? And the priests answered, and said: No. 14 And Aggeus said: If one that is unclean by occasion of a soul touch any of all these things, shall it be defiled? And the priests answered, and said: It shall be defiled. 15 And Aggeus answered, and said: So is this people, and so is this nation before my face, saith the Lord, and so is all the work of their hands: and all that they have offered there, shall be defiled.

14 "By occasion of a soul"... That is, by having touched the dead; in which case, according to the prescription of the law, Num. 19. 13, 22, a person not only became unclean himself, but made every thing that he touched unclean. The prophet applies all this to the people, whose souls remained unclean by neglecting the temple of God; and therefore were not sanctified by the flesh they offered in sacrifice: but rather defiled their sacrifices by approaching to them in the state of uncleanness.

16 And now consider in your hearts, from this day and upward, before there was a stone laid upon a stone in the temple of the Lord. 17 When you went to a heap of twenty bushels, and they became ten: and you went into the press, to press out fifty vessels, and they became twenty. 18 I struck you with a blasting wind, and all the works of your hand with the mildew and with hail, yet there was none among you that returned to me, saith the Lord. 19 Set your hearts from this day, and henceforward, from the four and twentieth day of the ninth month: from the day that the foundations of the temple of the Lord were laid, and lay it up in your hearts. 20 Is the seed as yet sprung up? or hath the vine, and the fig tree, and the pomegranate, and the olive tree as yet flourished? from this day I will bless you.

21 And the word of the Lord came a second time to Aggeus in the four and twentieth day of the month, saying: 22 Speak to Zorobabel the governor of Juda, saying: I will move both heaven and earth. 23 And I will overthrow the throne of kingdoms, and will destroy the strength of the kingdom of the Gentiles: and I will overthrow the chariot, and him that rideth therein: and the horses and their riders shall come down, every one by the sword of his brother. 24 In that day, saith the Lord of hosts, I will take thee, O Zorobabel the son of Salathiel, my servant, saith the Lord, and will make thee as a signet, for I have chosen thee, saith the Lord of hosts.

24 "O Zorobabel"... This promise principally relates to Christ, who was of the race of Zorobabel.