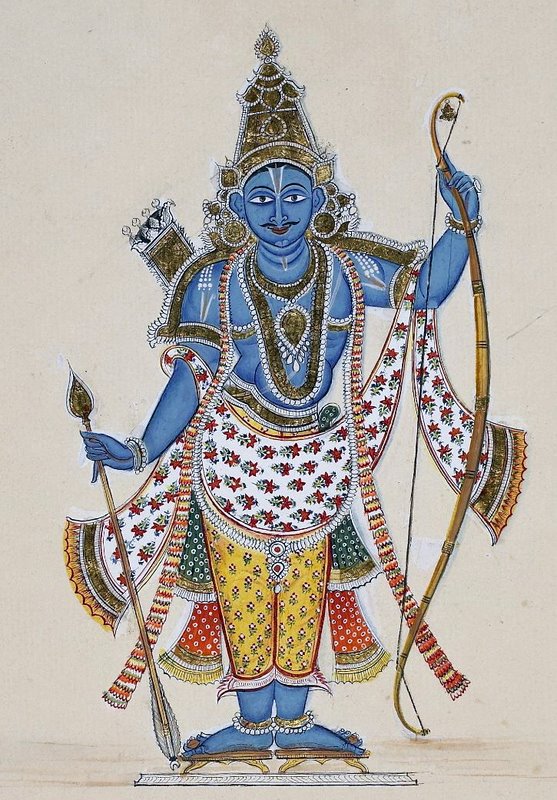 Rama (full name Ramachandra) is considered to be the seventh avatar of Vishnu in Hinduism, and a king of Ayodhya in Hindu scriptures. Rama was born in Suryavansha (Ikshvaku Vansh) later known as Raghuvnsha after king Raghu. Based on Puranic genealogy, Rama is believed by Hindus to have lived in the second Yuga called Treta Yuga, before Krishna who was born towards the end of Dwapara Yuga. Rama is traditionally considered to have appeared in the last quarter of Treta Yuga.

Rama is one of the many popular figures and deities in Hinduism, specifically Vaishnavism and Vaishnava religious scriptures in South and Southeast Asia. In Ayodhya, the Indian city believed to be the birthplace of Rama, he is also worshipped as an infant or Rama Lalla. Most of the details of Rama's life come from the Ramayana, one of the two great epics of India. Born as the eldest son of Kausalya and Dasharatha, king of Ayodhya, Rama is referred to within Hinduism as Maryada Purushottama, literally "the Perfect Man" or "Lord of Self-Control" or "Lord of Virtue". Rama is the husband of Sita, whom Hindus consider to be an Avatar of Lakshmi and the embodiment of perfect womanhood.

Rama's life and journey is one of perfect adherence to dharma despite harsh tests of life and time. He is pictured as the ideal man and the perfect human. For the sake of his father's honour, Rama abandons his claim to Kosala's throne to serve an exile of fourteen years in the forest. His wife Sita and brother Lakshmana, unable to live without Rama, decide to join him, and all three spend the fourteen years in exile together. While in exile, Sita is kidnapped by Ravana, the Rakshasa (Asura) monarch of Lanka. After a long and arduous search that tests his personal strength and virtue, Rama fights a colossal war against Ravana's armies. In a war of powerful and mythical magical beings, greatly destructive weaponry and battles, Rama slays Ravana in battle and liberates his wife. Having completed his exile, Rama returns to be crowned king in Ayodhya (the capital of his kingdom) and eventually becomes emperor, rules with happiness, peace, prosperity and justice—a period known as Rama Rajya.

Rama's courage in searching for Sita and fighting a terrible war to rescue his wife and their honour is complemented by Sita's absolute devotion to her husband's love, and perfect chastity despite being Ravana's captive. Rama's younger brothers, namely Lakshmana, Shatrughna and Bharata strongly complement his piety, virtue and strength, and they are believed by many to belong to the Maryada Purushottama and the Seventh Avatara, mainly embodied by Rama. Rama's piety and virtue attract powerful and devoted allies such as Hanuman and the Vanaras of Kishkindha, with whose help he rescues Sita. The legend of Rama is deeply influential and popular in the societies of the Indian subcontinent and across South East Asia. Rama is revered for his unending compassion, courage and devotion to religious values and duty.

Synopsis of the Ramayana Story

1. Dasharatha, King of Aydohya, has three wives and four sons. Rama is the eldest. His mother is Kaushalya. Bharata is the son of his second and favorite wife, Queen Kaikeyi. The other two are twins, Lakshman and Shatrughna. Rama and Bharata are blue, perhaps indicating they were dark skinned or originally south Indian deities.

2) A sage takes the boys out to train them in archery.

3) In a neighboring city the ruler's daughter is named Sita. When it was time for Sita to choose her bridegroom, at a ceremony called a swayamvara, the princes were asked to string a giant bow. No one else can even lift the bow, but as Rama bends it, he not only strings it but breaks it in two. Sita indicates she has chosen Rama as her husband by putting a garland around his neck. The disappointed suitors watch.

4) King Dasharatha, Rama's father, decides it is time to give his throne to his eldest son Rama and retire to the forest to seek moksha. Everyone seems pleased. This plan fulfills the rules of dharma because an eldest son should rule and, if a son can take over one's responsibilities, one's last years may be spent in a search for moksha. In addition, everyone loves Rama. However Rama's step-mother, the king's second wife, is not pleased. She wants her son, Bharata, to rule. Because of an oath Dasharatha had made to her years before, she gets the king to agree to banish Rama for fourteen years and to crown Bharata, even though the king, on bended knee, begs her not to demand such things. Broken-hearted, the devastated king cannot face Rama with the news and Kaikeyi must tell him.

5) Rama, always obedient, is as content to go into banishment in the forest as to be crowned king. Sita convinces Rama that she belongs at his side and his brother Lakshman also begs to accompany them. Rama, Sita and Lakshman set out for the forest.

Bharata, whose mother's evil plot has won him the throne, is very upset when he finds out what has happened. Not for a moment does he consider breaking the rules of dharma and becoming king in Rama's place. He goes to Rama's forest retreat and begs Rama to return and rule, but Rama refuses. "We must obey father," Rama says. Bharata then takes Rama's sandals saying, "I will put these on the throne, and every day I shall place the fruits of my work at the feet on my Lord." Embracing Rama, he takes the sandals and returns to Aydohya.

6) Years pass and Rama, Sita and Lakshman are very happy in the forest. Rama and Lakshman destroy the rakshasas (evil creatures) who disturb the sages in their meditations. One day a rakshasa princess tries to seduce Rama, and Lakshmana wounds her and drives her away. She returns to her brother Ravana, the ten-headed ruler of Lanka (Sri Lanka, formerly Ceylon), and tells her brother (who has a weakness for beautiful women) about lovely Sita.

Ravana devises a plan to abduct Sita. He sends a magical golden deer which Sita desires. Rama and Lakshman go off to hunt the deer, first drawing a protective circle around Sita and warning her she will be safe as long as she does not step outside the circle. As they go off, Ravana (who can change his shape) appears as a holy man begging alms. The moment Sita steps outside the circle to give him food, Ravana grabs her and carries her off the his kingdom in Lanka.

7) Rama is broken-hearted when he returns to the empty hut and cannot find Sita. A band of monkeys offer to help him find Sita.

Ravana has carried Sita to his palace in Lanka, but he cannot force her to be his wife so he puts her in a grove and alternately sweet-talks her and threatens her in an attempt to get her to agree to marry him. Sita will not even look at him but thinks only of her beloved Rama. Hanuman, the general of the monkey band can fly since his father is the wind, and Hanuman flies to Lanka and, finding Sita in the grove, comforts her and tells her Rama will soon come and save her.

8) Ravana's men capture Hanuman, and Ravana orders them to wrap Hanuman's tail in cloth and to set it on fire. With his tail burning, Hanuman hops from house-top to house-top, setting Lanka afire. He then flies back to Rama to tell him where Sita is.

9) Rama, Lakshman and the monkey army build a causeway from the tip of India to Lanka and cross over to Lanka. A might battle ensues. Rama kills several of Ravana's brothers and then

10. Rama frees Sita. After Sita proves here purity, they return to Ayodhya and Rama becomes king. His rule, Ram-rajya, is an ideal time when everyone does his or her dharma and "fathers never have to light the funeral pyres for their sons." Mahatma Gandhi dreamed that one day modern India would become a Ram-rajya.

Although Rama himself declares "he is but a man", and never once claims to be divine, Rama is regarded by Hindus as one of the most important Avatars of the god Vishnu and as an ideal man. (In contrast, Jesus Christ declared himself as Divine; and as God; and as sinless.) The journey he undertakes across India is used as a pilgrimage by the devout. The birthday and wedding day of Rama are celebrated on the ninth day of the Hindu lunar calendar with a festival called Rama Navani. The festival is usually celebrated with plays and stories read from the Ramayana.

The Ramayana is not considered to be mere allegory, but serves as a religious text for the Hindus similar to the Christian Bible or Jewish Torah. Reading certain key passages is believed to protect and bless the audience. Rama's strict adherence to dharma makes him the prime example of proper Hindu behavior, much as stories of Jesus' life make him a model for Christians. However, critics argue that Rama as depicted in the Ramayana was clearly not the benevolent king devotees claimed him to be. For example, Rama killed the Shudra Shambuka, a character in the Ramayana, for performing a yogic penance not in keeping with his perceived "low" station in society. Rama was thus a follower of the caste system, which have oppressed hundred of millions of people throughout the ages. Some hold the position that Rama murdered shambuka to reinstate the apartheid varna system, the worst of all the caste systems, which is an important feature of Hindu Dharma.

As with all false religions, the fables or myths about the pagan Hindu gods and goddesses in their sacred scriptures gave the pagans and unbelievers a false justification for living wicked and sinful lives (see Bhagavad Gita; Manusmriti). If even the gods are liars, lustful, wicked and evil, what then will become of the followers of these gods? (See Brahma; Shiva; Vishnu). Just look at Hindu society with all it's evils and injustices, especially the the caste system (and this system was supposedly endorsed by their so-called gods, sacred scripture and tradition).