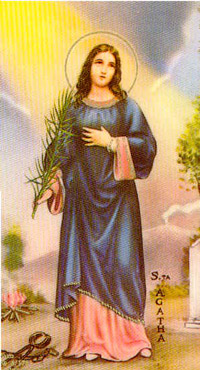 One of the most highly venerated virgin martyrs of Christian antiquity, put to death for her steadfast profession of faith in Catania, Sicily. Although it is uncertain in which persecution this took place, we may accept, as probably based on ancient tradition, the evidence of her legendary life, composed at a later date, to the effect that her martyrdom occurred during the persecution of Decius (250-253).

Historic certitude attaches merely to the fact of her martyrdom and the public veneration paid her in the Church since primitive times. In the so-called Martyrologium Hieronymianum (ed. De Rossi and Duchesne, in Acta SS., Nov. II, 17) and in the ancient Martyrologium Carthaginiense dating from the fifth or sixth century (Ruinart, Acta Sincera, Ratisbon, 1859, 634), the name of St. Agatha is recorded on 5 February. In the sixth century Venantius Fortunatus mentions her in his poem on virginity as one of the celebrated Christian virgins and martyrs (Carm., VIII, 4, De Virginitate: Illic Euphemia pariter quoque plaudit Agathe Et Justina simul consociante Thecla. etc.). Among the poems of Pope Damasus published by Merenda and others is a hymn to St. Agatha (P.L., XIII, 403 sqq.; Ihm, Damasi Epigrammata, 75, Leipzig, 1895). However, this poem is not the work of Damasus but the product of an unknown author at a later period, and was evidently meant for the liturgical celebration of the Saint's feast. Its content is drawn from the legend of St. Agatha, and the poem is marked by end-rhyme. From a letter of Pope Gelasius (492-496) to a certain Bishop Victor (Thiel. Epist. Roman. Pont., 495) we learn of a Basilica of St. Agatha in fundo Caclano, e.g., on the estate of that name. The letters of Gregory I make mention of St. Agatha at Rome, in the Subura, with which a diaconia or deaconry was connected (Epp., IV, 19; P.L., LXXVII, 688). It was in existence as early as the fifth century, for in the latter half of that century Rieimer enriched it with a mosaic. This same church was given the Arian Goths by Rieimer and was restored to Catholic worship by Pope Gregory I (590-604).

Although the martyrdom of St. Agatha is thus authenticated, and her veneration as a saint had even in antiquity spread beyond her native place, we still possess no reliable information concerning the details of her glorious death. It is true that we have the Acts of her martyrdom in two versions, Latin and Greek, the latter deviating from the former (Acta SS., I, Feb., 595 sqq.). Neither of these recensions, however, can lay any claim to historical credibility, and neither gives the necessary internal evidence that the information it contains rests, even in the more important details, upon genuine tradition. If there is a kernel of historical truth in the narrative, it has not as yet been possible to sift it out from the later embellishments. In their present form the Latin Acts are not older than the sixth century. According to them Agatha, daughter of a distinguished family and remarkable for her beauty of person, was persecuted by the Senator Quintianus with avowals of love. As his proposals were resolutely spurned by the pious Christian virgin, he committed her to the charge of an evil woman, whose seductive arts, however, were baffled by Agatha's unswerving firmness in the Christian faith. Quintianus then had her subjected to various cruel tortures. Especially inhuman seemed his order to have her breasts cut off, a detail which furnished to the Christian medieval iconography the peculiar characteristic of Agatha. But the holy virgin was consoled by a vision of St. Peter, who miraculously healed her. Eventually she succumbed to the repeated cruelties practised on her. As already stated, these details, in so far as they are based on the Acts, have no claim to historical credibility. Allard also characterizes the Acts as the work of a later author who was more concerned with writing an edifying narrative, abounding in miracles, than in transmitting historical traditions.

Both Catania and Palermo claim the honour of being Agatha's birthplace. Her feast is kept on 5 February; her office in the Roman Breviary is drawn in part from the Latin Acts. Catania honours St. Agatha as her patron saint, and throughout the region around Mt. Etna she is invoked against the eruptions of the volcano, as elsewhere against fire and lightning. In some places bread and water are blessed during Mass on her feast after the Consecration, and called Agatha bread.
The Lives of the Saints