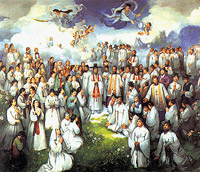 "Then he did do take broches of iron and put them through their ears and through their nostrils, and after did do smite off their heads. And, by the will and power of our Lord, they arose up, and took their heads in their hands, and bare them two miles far from the place where they had been beheaded."

Saints Fulcian and Victorice, of whom the solemnity is hallowed, came from the city of Rome for to preach the faith of Jesu Christ into these parts, and were in the city of Therouanne and preached there the faith. And they repaired by Amiens, and passed by a little village named Gains, and found there a good man that believed in God, and he was named Gentian. And he saluted them and said: Sirs, ye be welcome, and they said: God save you. And after, he demanded them: What seek ye? And they answered: We seek one of our fellows called Quintin, and he said: Ah! fair sirs, he was but late beheaded not long sith, and sentence was given that, where such manner people might be found that preached of God, that they should be slain, but come ye near, and eat ye a morsel of bread. And as they were there, a tyrant that was called Rictius Varus came with servants, and said to Gentian: Deliver to us them that be herein, and he said: I shall not do it. Then he drew out his sword all naked. Gentian said: They take none heed of you. The tyrant Rictius Varus had great anger and sorrow, and made to take Gentian, and smote off his head. And after, he made to be taken S. Fulcian and S. Victorice, and brought them to Amiens, and said to them that they should forsake their God, whom they had made die an evil death, and they said they would not. Then he did do take broches of iron and put them through their ears and through their nostrils, and after did do smite off their heads. And, by the will and power of our Lord, they arose up, and took their heads in their hands, and bare them two miles far from the place where they had been beheaded. And all three were buried together in that town which is called Saint Fulcien. A great rage and madness took the tyrant Rictius Varus, and he cried through the city of Amiens, all enraged: Alas! alas! alas! now be well the Saints avenged on me, and sith died foul in his woodness. And thus were the friends of our Lord avenged on the tyrant, and by such martyrdom the glorious saints departed out of this life unto the realm of heaven. Then pray we unto the glorious martyrs S. Fulcian, S. Victorice, and S. Gentian, that they will pray God for us, that by their merits we may have pardon and forgiveness of our sins. Amen.
The Lives of the Saints