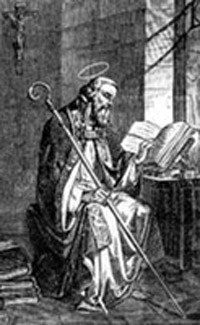 "When S. Hilary came to Poictiers he met a child dead, borne for to be buried, and the child was not baptized; which child by virtue of his prayer he raised to life, for he lay long in the dust in prayer, and when he arose out of his prayer the child arose from death to life."

The Life of St. Hilary. The interpretation of his name

Of the Life of S. Hilary.

S. Hilary, which was Bishop of Poictiers, was born in the country of Guienne. He had a wife wedded, and a daughter, and whereas he was in habit secular he lived after the life of a monk. He profited so much in holy life and sciences that he was chosen Archbishop of Poictiers. A manner of an heresy reigned in his country and through all France, which was the sect of the Arians, the which he destroyed to his power. Nevertheless by the commandment of the emperor, which was of the party of the heretics, by the suggestion of two bishops of that sect he was exiled, with which two bishops he disputed, and overcame them. Afterward, for they might not gainsay the truth of the matter, ne could not bear ne answer to his eloquence, so that he was constrained to come again to Poictiers. And as he passed by an isle of the sea, which was full of serpents, he chased them away by the virtue of his commandment, and by his sight only, and pight a staff in the middle of the isle and gave to the serpents liberty to come to that staff and not to pass farther, and the serpents obeyed him, which part is no land now but sea.

When S. Hilary came to Poictiers he met a child dead, borne for to be buried, and the child was not baptized; which child by virtue of his prayer he raised to life, for he lay long in the dust in prayer, and when he arose out of his prayer the child arose from death to life.

S. Hilary had a daughter named Apia and she would have been married, but S. Hilary preached to her so much of the estate of virginity that she changed her purpose. And when she was confirmed in this will and purpose S. Hilary doubted that she should change, and prayed our Lord for to take her while she was in good purpose, and anon she died, and S. Hilary buried her. And when her mother the wife of S. Hilary saw that her daughter was dead, she prayed to her husband, that he should impetre and get for her like as he had done for his daughter. And anon as S. Hilary had made his orison, she died, and by this manner he sent tofore him his wife and his daughter.

In the end, when S. Hilary had impetred of God many miracles to be showed by his prayer, he became sick, and saw his death approach. Then he called to him one of his chaplains whom he much loved and said to him: Go thou out and bring to me word what thou hearest. When he had been long without, he came in and told to S. Hilary that he had heard a great noise in the city; and when it was midnight he sent his chaplain again to hearken as he had done tofore; and when he came again in to the chamber for to tell that he had heard nothing, a great clear light entered in, that the priest might not behold it. And when the light departed S. Hilary died, that was the year of grace three hundred and forty, let us pray to him that he pray for us. Amen.
The Lives of the Saints