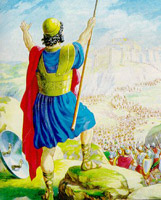 St Joshua in the Bible Story. Saint Joshua Bible Character Life, Who is he? Patron St of the Catholic Church

"For whom God showed many great marvels and in especial one; that was that the sun stood still at his request, till he had overcome his enemies, by the space of a day."

The History of St Joshua

After Moses, Joshua was duke and leader of the children of Israel, and brought them into the land of behest, and did many great battles. For whom God showed many great marvels and in especial one; that was that the sun stood still at his request, till he had overcome his enemies, by the space of a day. And our Lord, when he fought, sent down such hail-stones that slew more of his enemies with the stones than with man's hand.

Joshua was a noble man and governed well Israel, and divided the land unto the twelve tribes by lot. And when he was an hundred and ten years old he died. And divers dukes after him judged and deemed Israel, of whom be noble histories, as of Jephthah, Gideon, and Sampson, which I pass over unto the histories of the kings, which is read in holy church from the first Sunday after Trinity Sunday, unto the first Sunday of August. And in the month of August is read the Book of Sapience, and in the month of September be read the histories of Job, of Tobit, and of Judith, and in October the history of the Maccabees, and in November the book of Ezechiel and his visions. And in December the history of Advent. and the book of lsaiah unto Christmas and after the feast of Epiphany unto Septuagesima be read the Epistles of Paul. And this is the rule of the temporal through the year, etc.
The Lives of the Saints