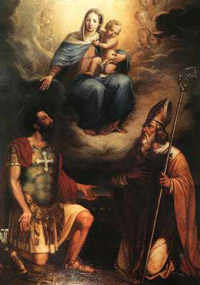 Reputed first Bishop of Marseilles, died in the second half of the first century.

According to a tradition, or rather a series of traditions combined at different epochs, the members of the family at Bethany, the friends of Christ, together with some holy women and others of His disciples, were put out to sea by the Jews hostile to Christianity in a vessel without sails, oars, or helm, and after a miraculous voyage landed in Provence at a place called today the Saintes-Maries. It is related that they separated there to go and preach theGospel in different parts of the southeast of Gaul. Lazarus, of whom alone we have to treat here, went to Marseilles, and, having converted a number of its inhabitants to Christianity, became their first pastor. During the first persecution under Nero he hid himself in a crypt, over which the celebrated Abbey of St.-Victor was constructed in the fifth century. In this same crypt he was interred, when he shed his blood for the faith. During the new persecution of Domitian he was cast into prison and beheaded in a spot which is believed to be identical with a cave beneath the prison Saint-Lazare. His body was later translated to Autun, and buried in the cathedral of that town. But the inhabitants of Marseilles claim to be in possession of his head which they still venerate.

Like the other legends concerning the saints of the Palestinian group, this tradition, which was believed for several centuries and which still finds some advocates, has no solid foundation. It is in a writing, contained in an eleventh century manuscript, with some other documents relating to St. Magdalen of Vézelay, that we first read of Lazarus in connection with the voyage that brought Magdalen to Gaul. Before the middle of the eleventh century there does not seem to be the slightest trace of the tradition according to which the Palestinian saints came to Provence. At the beginning of the twelfth century, perhaps through a confusion of names, it was believed at Autun that the tomb of St. Lazarus was to be found in the cathedral dedicated to St. Nazarius. A search was made and remains were discovered, which were solemnly translated and were considered to be those of him whom Christ raised from the dead, but it was not thought necessary to inquire why they should be found in France.

The question, however, deserved to be examined with care, seeing that, according to a tradition of the Greek Church, the body of St. Lazarus had been brought to Constantinople, just as all the other saints of the Palestinian group were said to have died in the Orient, and to have been buried, translated, and honoured there. It is only in the thirteenth century that the belief that Lazarus had come to Gaul with his two sisters and had been Bishop of Marseilles spread in Provence. It is true that a letter is cited (its origin is uncertain), written in 1040 by Pope Benedict IX on the occasion of the consecration of the new church of St.-Victor in which Lazarus is mentioned. But in this text the pope speaks only of relics of St. Lazarus, merely calling him the saint who was raised again to life. He does not speak of him as having lived in Provence, or as having been Bishop of Marseilles.

The most ancient Provençal text alluding to the episcopacy of St. Lazarus is a passage in the "Otia imperialia" of Gervase of Tillbury (1212). Thus the belief in his Provençal apostolate is of very late date, and its supporters must produce more ancient and reliable documentary evidence. In the crypt of St.-Victor at Marseilles an epitaph of the of the fifth century has been discovered, which informs us that a bishop named Lazarus was buried there. In the opinion of the most competent archæologists, however, this personage is Lazarus, Bishop of Aix, who was consecrated at Marseilles about 407, and who, having had to abandon his see in 411, passed some time in Palestine, whence he returned to end his days in Marseilles. It is more than likely that it is the name of this bishop and his return from Palestine, that gave rise to the legend of the coming of the Biblical Lazarus to Provence, and his apostolate in the city of Marseilles.

Lazarus (Greek Lazaros, a contraction of Eleazaros--see 2 Maccabbees 6:18 — meaning in Hebrew "God hath helped"), the name of two persons in the New Testament; a character in one of Christ's parables, and the brother of Martha and Mary of Bethania. Lazarus of the parable The story

The dramatic story of the rich man and the beggar (only in Luke 16:19-31) is set forth by Christ in two striking scenes:

* Their Condition Here: The rich man was clothed in purple and byssus (D.V. fine linen), and spent each day in gay carousing. The beggar had been cast helpless at the rich man's gate, and lay there all covered with sores; he yearned for the crumbs that fell from the rich man's table, but received none, and was left to the dogs. * Their Condition Hereafter: The early banquet is over; the heavenly banquet is begun. Lazarus partakes of the banquet in a place of honour (cf. John 13:23). He reclines his head on Abraham's bosom. The rich man is now the outcast. He yearns for a drop of water. Lazarus is not allowed to leave the heavenly banquet and tend to the outcast.

Catholic exegetes now commonly accept the story as a parable. It is also legendary that the sores of Lazarus were leprous. The purpose of the parable is to teach us the evil result of the unwise neglect of one's opportunities. Lazarus was rewarded, not because he was poor, but for his virtuous acceptance of poverty; the rich man was punished, not because he was rich, but for vicious neglect of the opportunities given him by his wealth. Lazarus of the miracle

This personage was the brother of Martha and Mary of Bethania; all three were beloved friends of Jesus (John 11:5). At the request of the two sisters Jesus raised Lazarus from the dead (John 11:41-44). Soon thereafter, the Saturday before Palm Sunday, Lazarus took part in the banquet which Simon the Leper gave to Jesus in Bethania (Matthew 26:6-16; Mark 14:3-11; John 12:1-11). Many of the Jews believed in Jesus because of Lazarus, whom the chief priests now sought to put to death. The Gospels tell us no more of Lazarus.
The Lives of the Saints