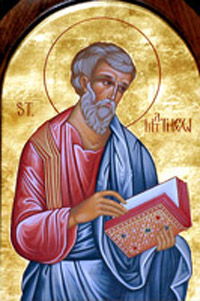 Matthew is spoken of five times in the New Testament; first in Matthew 9:9, when called by Jesus to follow Him, and then four times in the list of the Apostles, where he is mentioned in the seventh (Luke 6:15, and Mark 3:18), and again in the eighth place (Matthew 10:3, and Acts 1:13). The man designated in Matthew 9:9, as "sitting in the custom house", and "named Matthew" is the same as Levi, recorded in Mark 2:14, and Luke 5:27, as "sitting at the receipt of custom". The account in the three Synoptics is identical, the vocation of Matthew-Levi being alluded to in the same terms. Hence Levi was the original name of the man who was subsequently called Matthew; the Maththaios legomenos of Matthew 9:9, would indicate this.

The fact of one man having two names is of frequent occurrence among the Jews. It is true that the same person usually bears a Hebrew name such as "Shaoul" and a Greek name, Paulos. However, we have also examples of individuals with two Hebrew names as, for instance, Joseph-Caiaphas, Simon-Cephas, etc. It is probable that Mattija, "gift of Iaveh", was the name conferred upon the tax-gatherer by Jesus Christ when He called him to the Apostolate, and by it he was thenceforth known among his Christian brethren, Levi being his original name.

Matthew, the son of Alpheus (Mark 2:14) was a Galilean, although Eusebius informs us that he was a Syrian. As tax-gatherer at Capharnaum, he collected custom duties for Herod Antipas, and, although a Jew, was despised by the Pharisees, who hated all publicans. When summoned by Jesus, Matthew arose and followed Him and tendered Him a feast in his house, where tax-gatherers and sinners sat at table with Christ and His disciples. This drew forth a protest from the Pharisees whom Jesus rebuked in these consoling words: "I came not to call the just, but sinners".

No further allusion is made to Matthew in the Gospels, except in the list of the Apostles. As a disciple and an Apostle he thenceforth followed Christ, accompanying Him up to the time of His Passion and, in Galilee, was one of the witnesses of His Resurrection. He was also amongst the Apostles who were present at the Ascension, and afterwards withdrew to an upper chamber, in Jerusalem, praying in union with Mary, the Mother of Jesus, and with his brethren (Acts 1:10 and 1:14).

The Latin Church celebrates the feast of St. Matthew on 21 September, and the Greek Church on 16 November. St. Matthew is represented under the symbol of a winged man, carrying in his hand a lance as a characteristic emblem.

Here beginneth the Life of S. Matthew, and, first of the interpretation of his name.

Matthew was named by twain names, that was Matthew and Levy. Matthew is expounded a hasty gift, or a giver of counsel, or it is said Matthew of magnus, and theos, that is God, as it were a great God. Or of manus, that is a hand, and theos, that is God, as it were the hand of God. He was a gift of hastiness by hasty conversion, a giver of counsel by wholesome predication, great to God by perfection of life, and the hand of God by writing of the gospel of God. Levy is interpreted assumyt, or applied, or put to, or set. He was assumpt and taken away from gathering of tolls, he was applied to the number of the apostles, he was put to the company of the evangelists, and set to the catalogue of martyrs.

Matthew the apostle, preaching in Ethiopia, in the city that is said Nadaber, found there two enchanters named Zaroes and Arphaxat, which enchanted the men by their art, so that whom that they would, should seem that thy were prived of the health and office of their members. Which were so elevated in pride that they made them to be honoured as gods. Then Matthew the apostle entered into that city and was lodged with the eunuch of Candace, the queen, whom Philip baptized. Then he discovered the faits and deeds of the enchanters in this manner, that all that they did to men into hurt, that turned Matthew into health. Then this eunuch demanded of S. Matthew how he spake and understood so many tongues. And then Matthew told him how the Holy Ghost descended and had given to the apostles all science of tongues. That like as they had emprised by their pride to make the tower unto heaven which ceased by confusion of tongues that were changed, all in like wise the apostles made a tower of sciences of tongues, and nothing of stones but of virtues, by the which all that believe shall mount up into heaven.

Then came before them a man that said that the enchanters were come with two dragons, which cast fire and sulphur by their mouths and nostrils, and slew all the men. Then the apostle garnished him with the sign of the cross and went out surely to them, and anon as these dragons saw him, anon they came and slept at his feet. Then said Matthew to the enchanters: Where is your craft? Awake ye them if ye may; and if I would pray our Lord, that which ye would have committed in me, I should soon execute on you. And when the people were assembled, he commanded the dragons that they should depart without hurting of any, and they went anon.

And the apostle there made a great sermon of the glory of paradise terrestrial, saying that it appeared above all the mountains and was nigh unto heaven, and that there were neither thorns ne rocks, and that the lilies and roses flourished always and waxed never old; but the people were there always young, and the sound of angels sounded there always, and the birds came anon as they were called. And said that out of this paradise was a man cast, but he was called to the paradise of heaven by the nativity of our Lord. And as he said these words to the people, anon a great noise arose, and a great weeping was made for the son of the king which was dead, and when these enchanters might not raise him, they made the king believe that he was ravished into the company of the gods, and that he should make to him a temple and an image. And then the foresaid eunuch, keeper of the queen Candace, made the enchanters to be kept, and sent for the apostle. And when the apostle was come he made his prayer and raised the king's son anon. And then the king, which was named Egippus, sent for all the men in his provinces saying to them: Come and see ye God in the likeness of a man. And then the people came with crowns of gold and divers manner of sacrifices, and would have sacrificed to him, and then S. Matthew beheld them and said: What do ye men? I am not God, but I am servant of our Lord. And by the commandment of him they made a great church of the gold and silver that they had brought, which in thirty days space was edified and achieved. In which church the apostle sat three and thirty years, and converted all Ethiopia to the faith of Christ. And then the king Egippus, with his wife and his daughter, and all the people, were baptized. And then the apostle hallowed to God Ephigenia the king's daughter, and made her mistress and governess of more than two hundred virgins.

The Lives of the Saints